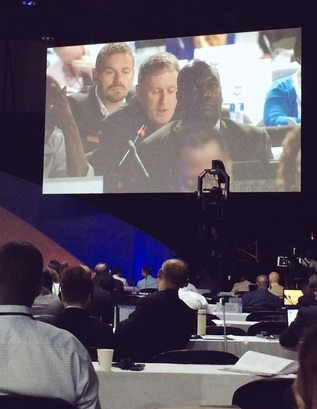 Dr. Colin Simpfendorfer (IUCN Shark Specialist Group Co-Chair) gives an intervention.
So far, CITES CoP17 has focused primarily on two technical documents relevant to sharks and rays. The reports from Secretariat (56.1) and the Animals Committee on Sharks and Rays (56.2). The Animals Committee document describes progress in implementing the shark and ray CITES listings agreed at the last CoP (CoP16) in 2013. These documents contain draft decisions to further support implementation that were adopted by Committee I.

Report from the Secretariat: Brazil, Chile, China, Colombia, Egypt, Germany on behalf of the European Union and its member States, Fiji, India, Indonesia, Japan, Kenya, Maldives, Morocco, Samoa, Senegal, Sri Lanka and Tonga supported the document and outlined activities they had undertaken regarding National Plans of Action for Sharks, training workshops, research, capacity-building and implementation. Many stated that it was challenging to make non-detriment findings (NDFs), and that the identification of parts and CoP17 Com. I Rec. 2 – p. 2 derivatives in trade posed difficulties. Germany on behalf of the European Union (EU) and its member States indicated that the EU was considering a second phase of a project to assist Parties in implementing CITES for marine species, including sharks. Germany had produced a guide to making NDFs for trade in sharks and rays, which was available from the CITES website. However, Chile and Japan believed that the NDF guide was too complex, and Japan had produced simplified NDF guidelines that were also available on the CITES website.

The International Union for the Conservation of Nature (IUCN), speaking on behalf of Shark Advocates, the Shark Trust, TRAFFIC, World Conservation Society and the World Wildlife Fund, noted that species-specific identification, trade in shark meat and illegal, unreported and unregulated fishing remained important problems. They believed that NDFs could be made, even when little information was available, by adopting a precautionary approach; the Shark Specialist Group of the Species Survival Commission of IUCN could provide assistance with this. The International Wildlife Management Consortium asked what conservation benefits had arisen as a result of listing sharks and rays in the Appendices. The Chair established a small drafting group comprising Iceland, Israel, Japan, New Zealand, and the United States of America to revise the text of the draft decisions in Annex 1 to document CoP17 Doc. 56.1 and report back to the Committee. 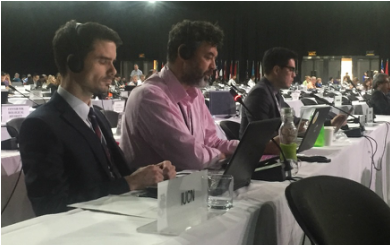 Dr. Nick Dulvy (IUCN Shark Specialist Group Co-Chair) gives an intervention.
The second discussion relevant to sharks and rays was regarding the maintenance of the appendices, and specifically focused on the Freshwater Stingrays (Potamotrygonidae spp.).